YouTube has opened up an entire world of learning since its founding back in early 2005. It has been pointed out that in the time it takes you to watch an average-length video on YouTube, some 1,000 more have already been uploaded.

The image above is from Grand-Bassam, Côte d'Ivoire! Visit our log in page to see amazing images from every country on the planet.

It would take you tens of thousands of years to watch the entire library back-to-back. Fortunately, international language learners needn't do that.

Among the many channels on YouTube, you'll find many great options that can help you with language learning. Today, rather than get too specific about any one language, have picked out three fantastic channels that will appeal to international language learners of all stripes.

If you want to expand your knowledge of world languages and culture, or just get inspiration for the next target language you want to have a go at learning, then these three channels are ones to explore.

This Canada-based channel is a phenomenal resource with over 1 million subscribers already. On the channel, content is broadly divided into the following sorts:

There is more content, too, but these three do cover the great majority of what you'll find there. This is a great stop for those who are interested in starting a new language but need to get some inspiration. Content is not just limited to the mainstream, either. There are videos on languages like Norwegian, Turkish, Albanian, and even Jamaican Patois.

Videos are very digestible at 5-15 minutes, and will be instrumental in helping you learn more about a language you're interested in mastering.

We advise that you don't watch this channel when you're feeling a little hungry, because it will only make it worse! The channel is run by one Trevor James, who shares his love for street food and other local delicacies of the places he is traveling through. He is based in Chengdu, in Sichuan Province, China.

The channel is enjoyed by 4.88 million food-loving subscribers. Much of the content is focused on Asian food, with the creator being particularly fascinated, it seems, with noodles. The following countries have so far been featured:

One of the more unique aspects of this channel is the focus on street and local food, as opposed to just visiting the most famous or Michelin-starred restaurants in the area. James likes to get into the thick of it, experiencing the food that locals adore. He doesn't just stick to one place or even the major cities of his destinations, either. He travels the whole countries on what he calls his Street Food Tour.

The cuisine of a country is a window into its broader culture, and in many countries has an inextricable link to its language. Learners will sure get inspired by the many delicious-looking offerings on James's channel.

This one has a smaller following of just-under 50,000 subscribers, but does give you the advantage of more diverse content not entirely language or food focused like the others we mentioned above. For a more general dose of inspiration to get started on a new language, there's nothing quite like a high-quality travel program, and the BBC deliver on this channel.

You can see 5-minute shorts on individual countries and the travel highlights. You can also follow top chefs as they explore the world's major culinary destinations. There's a great back catalog, too, featuring content going back to at least 2014.

Typical content includes country-focused short videos that give you some of the best travel highlights of a particular destination. Besides that, they have the "Taste of" series which is food-focused. Fans of the Asian movie star Henry Golding will be delighted to know that he is also one of the presenters and has been since 2014. The catalog has a whole section on some of his best adventures around the world.

🎯 Get Inspired, Find a Direction

One of the best things about these YouTube channels is their unique ability to get learners inspired and driven to learn other languages. As the pandemic comes to within visible sight of its end, and the world prepares to open up once more, travelers and wannabe expats will be champing at the bit to find new destinations to enjoy. A bit of language knowledge will make that travel all the sweeter.

Over the past 12 months or more, the shift to online learning for many has been obligatory and not exactly the choice they would have originally made. To the pleasant 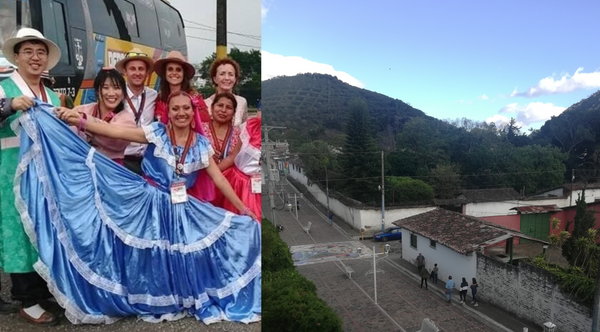 Hello everyone! My name is Ivette and I´m from El Salvador, a country known by different nicknames, among them, "El Pulgarcito de América", "El Valle de las Hamacas", "Tierra