Parents around the world are actively trying to determine what kinds of academic skills and extracurricular activities would benefit their children. These days, we're spoilt for choice! There are traditional activities like musical instrument classes, athletics, the chess club, etc. And then there are the more modern additions like coding classes, app development, entrepreneurial seminars and motivational public speaking.

The image above is from Kamianets-Podilskyi, Ukraine! Visit our log in page to see amazing images from every country on the planet.

There’s one choice, however, whose academic value and practical application the world over are beyond any doubt --- learning an additional language. Far from just furnishing your child with the ability to communicate with others around the world, there is a far greater treasure lurking at the heart of the language-learning quest. What is it? The chance to give your child a whole new perspective on the world!

Back in November 2017, cognitive scientist Dr. Lera Boroditsky led a TED talk in which she explains the many ways that language goes beyond communication to actually changing the way we think about things. She quoted ancient figures such as Charlemagne, who said that “to have a second language is to have a second soul,” to also demonstrate that we have long understood the power and significance of our linguistic prowess.

In her talk, Boroditsky used many examples of how the structure and foundations of our language have a profound effect on our cognitive development. Pointing to the Kuuk Thaayorre, an Aboriginal community in Australia, she explains how their language uses compass directions instead of words like left and right, and that the word for “hello” translates as “which way are you going?” She elaborates that such ingrained use of compass directions makes the Kuuk Thaayorre remarkably well-oriented. As she says, “you literally couldn’t get past ‘hello’ if you didn’t know which way you were going.”

🤔 What does it all mean?

From the Kuuk Thaayorre, what we learn is that language does more than merely furnish us with communication tools. It can actually give perspectives that open up new abilities and sharpen other skills within us. Learning a language, therefore, is the key to a whole new way of looking at the world, and that perspective comes with added benefits for young people.

Have you ever wondered about the stereotype of east Asians being so darned good at math? It’s not a myth according to the OECD’s Programme for International Student Assessment (PISA), students in Singapore, China, South Korea and Japan are consistently stronger in math skills. Did you also know that their languages actually have a lot to do with it?

Let’s use Mandarin as the example, when you start counting in Mandarin, many things look somewhat familiar until you get to the number 10,000.

Alien at it sounds, as you explore the numbers higher and higher, the Chinese counting system starts to reveal itself as a kind of miraculous metric-like system in its evenness and simplicity. One hundred thousand is “10 wan” and one million is “100 wan.” Ten million is “1000 wan” and a new term doesn’t surface until we get to 100 million, which is “yi 亿.” Then, the process begins again – one billion is “10 yi” and so on.

With practice, learners of Chinese find they can start to do arithmetic better in this new language because instead of an obscure term like “twenty” or “billion” we get terms divisible by 10 – “twenty” is “two ten – 二十” This means you are creating those connections and relationships between numbers as you are saying them. It’s remarkable!

👪 Give your child a new view of the world

Encourage your child to engage with native speakers and learn new languages! The miracle of the Internet means it can be done from the comfort of your own home, and children working at their skills can gain relative proficiency in a short time. As the world gets smaller, our children’s minds have to become more open and more engaged. Open the doors to that change with the exciting journey of a new language! 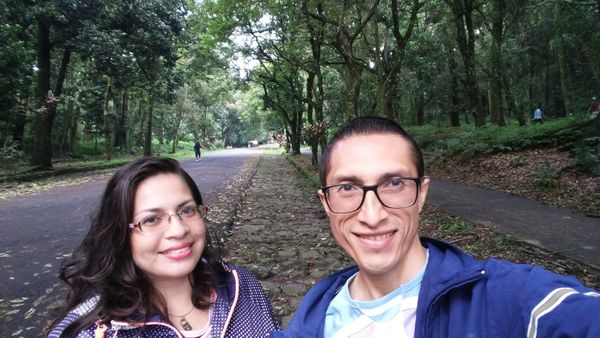 You may recognize the female in Ivan's pictures...that's right, he's married to Lisseth! Learn a little more about Ivan and their family in this blog post 😊 Where are you

Learning a foreign language is something that people experience differently as individuals. We struggle with different elements of a language. It could be the gendered nouns of European languages that